The Heart of a Story 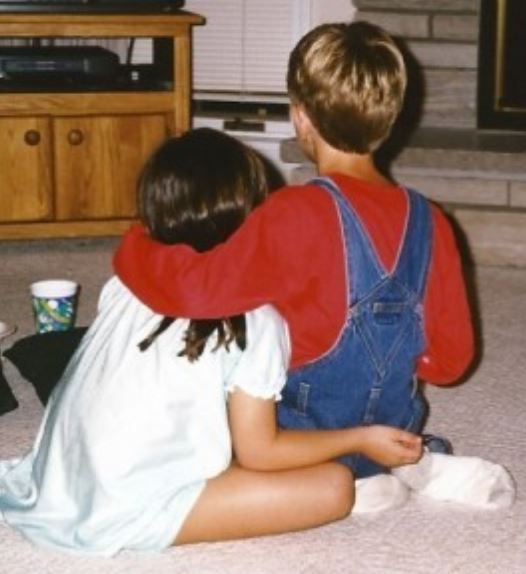 Funny how the vision of a story begins, then evolves, and finally arrives at its final form–in unexpected ways. When I began writing my forthcoming picture book, Milo’s Moonlight Mission, I didn’t fully realize the impact my daughter and nephew would have on the story. When I started out, I managed to capture its literal truth—that of experiencing the wonder of a celestial phenomenon (a meteor storm). But at its heart, the story is about something even bigger, as depicted in this photo of Meg and Chris. Here, he is comforting her during a frightening scene in Lady and the Tramp. Having watched the movie many times, he knew this scene scared her, so he scooted over and put his arm around her. Lovely! But what does this photo, which embodies the warmth of a familial relationship, have to do with Milo’s Moonlight Mission?

Chris was sleeping over at our house the night we heard about a predicted meteor storm—hyped as what could be the most intense in decades. We rose at 4AM, trudged outside with blankets and chairs, and watched the sky put on a show, the likes of which I’d never seen. It remains for all of us, one of our most vivid, cherished memories.

Milo’s Moonlight Mission, formerly titled Clear Skies, Storm Likely, began as the story of a family’s witnessing a remarkable meteor storm. Though I didn’t see it clearly at the time, the story was about so much more. Time. Precious time. Time that seems more difficult than ever to harness in our crazy world. In order to spotlight the urgency of time spent together, I decided to make the story about one parent and one child. But for me, the beating heart of the story will never change.

And for that magical night many years ago, spent with my husband, daughter, and nephew, I’m over-the-blue-moon grateful.